Guest Talk by Dr. Silvia Masiero on ‘Aadhaar, Demonetisation and the Poor: A View from the Field’ 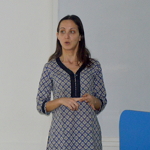 Description: Dr. Silvia Masiero (Loughborough University, UK) delivered a guest talk titled ‘Aadhaar, Demonetisation and the Poor: A View from the Field’ on 25th January 2017 at IIIT Bangalore. The talk was based on her ongoing research on Aadhaar and Demonetisation and its impact on the poor.

“In the immediate aftermath of demonetisation, two twin arguments emerged on the context and consequences of the government’s sudden move. One pertained to the effectiveness of the move on curbing black money, framed as abnormally diffused in the cash-intensive Indian economy. The second asserted that digital infrastructures would mitigate the effects of the move, especially for the unbanked poor who conduct most of their transactions in cash. The Aadhaar system, centred on biometric data captured to improve access to social services, is the heart of this infrastructure.

In this seminar I examine the potential of an Aadhaar-centred financial inclusion system to help marginalised, unbanked communities to deal with demonetisation, and ease their transition to a ‘cashless’ economy. I find three constraints to this, lying in issues of technology ownership, access to informational networks, and infrastructural readiness for cashless transactions. As a result, it seems that the poor cannot be easily included in the cashless economy prospected by demonetisation, and digitality should be supplemented by other means to reduce the humanitarian backlash of the move.”

Dr. Silvia Masiero is a Lecturer in International Development at Loughborough University, United Kingdom. Her research focuses on the use of information and communication technologies (ICTs) in the field of socio-economic development. In particular, she studies the multiple forms of embeddedness of the IT artefact in development policy and governance, with a specific interest in its participation in the politics of anti-poverty programmes. Her current work revolves around the multiple consequences of the adoption of digital platforms for financial inclusion.